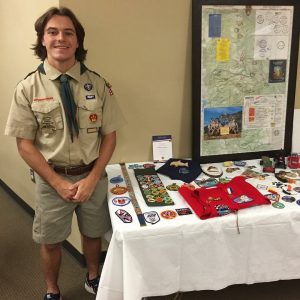 Jackson Sauers, a member of Troop 533 chartered by Oak Mountain Presbyterian Church in Birmingham, recently received the rank of Eagle Scout by the Boy Scouts of America under the leadership of Mark Clark. Jackson joined Cub Scouts in 2005 as a Tiger Cub, earned his Arrow of Light and Religious knots and crossed over to Boy Scouts. During his rank advancement Jackson held the following leadership positions:  Troop guide, Quartermaster, Chaplain, and Librarian.  He also was a Crew Leader of his Troop on a backpacking trek at Philmont Scout Ranch in Cimarron, New Mexico. He completed 25 merit badges, attended multitude of campouts, hiked several hundred miles, and participated in over 100 hours of community service hours. For his Eagle Scout project, he constructed 6 outdoor wooden benches for his church, St. Thomas Episcopal Church, to use in an outdoor worship area.

He is a senior at Oak Mountain High School where he is a member of the football and lacrosse team and runs indoor track. He serves as an Oak Mountain Master, an Ambassador to his school; he is a Peer Helper and a Big Brother of the Big Brother/Big Sister Program. He is active in Key club and several other organizations. Jackson plans on attending college to study Civil Engineering. He is the son of Leanne and Robby Sauers.

Please join the Shelby District in congratulating Jackson on this accomplishment!